My name is Kenny and I’m Angry. Angry as hell. 20 years ago, I watched a movie called Bamboozled. The description of this movie is set up properly by a user on IMDB:

Dark, biting satire of the television industry, focusing on an Ivy League educated black writer at a major network. Frustrated that his ideas for a “Cosby Show”-esque take on the black family have been rejected by network brass, he devises an outlandish scheme: reviving the minstrel show. This is the hook: Instead of white actors in black face, the show stars black actors in even blacker face. The show becomes an instant smash, but with the success also come repercussions for all involved.

The first time I watched this movie, I was alone in my living room. And I didn’t move for a good hour or so. I remember sitting in my living room gobsmacked. I did not know what I was experiencing at the time. This feeling deep inside of me. All I knew was that I vowed I would never watch this movie again. I didn’t want to feel that pain. That… disgust. Spike Lee put together an incredibly dark satire that, 20 years later, resonates SO very hard. Throughout the movie, symbols of a time only 2 – 3 generations ago are incorporated into the story. Images of Rastus, Mammy, Little Sambo and more racial stereotypes fill the screen. With the retiring of Aunt Jemima & Uncle Ben as a “mascots” of popular brands due to their racist origins, I recalled that feeling this movie gave me. And I began looking at other imagery, sayings, songs and parts of America’s “History” that so many cling too and very well may end up finding themselves under deeper scrutiny now. With good. Damn. Reason. Here are some that may actually surprise you:

In the food realm: 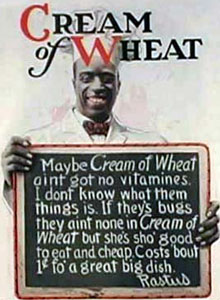 Along with Aunt Jemima and Uncle Ben, Cream of Wheat sports a black mascot. But he’s not just any black mascot, it is another version of  Rastus, another character formerly used in minstrel shows. He was portrayed as a non-threatening, childlike Black slave.

How about some sayings?

Meaning: Ethnic Slur – Black people (typically children). Recently in the headlines because University of Florida frequently used a chant for their sports teams opponents “Gator Bait” as the mascot for UF is the Gators. They are known as The Florida Gators.

The New York Zoological Gardens’ zookeeper sent two black children into an enclosure that housed more than 25 crocodiles and alligators. The children were chased by the hungry reptiles, entertaining zoo patrons while leading the alligators and crocodiles out of the reptile house, where they spent the winter, into a tank where they could be viewed during the summer.

The idea that black children are acceptable gator bait was not born in the head of one zookeeper, it was a practice in the American Everglades that inspired lore and occasioned memorabilia.

In 1923, Time magazine reported that “colored babies were being used for alligator bait” in Chipley, Florida. “The infants are allowed to play in the shallow water while expert riflemen watch from concealment nearby. When a saurian approaches this prey, he is shot by the riflemen.”

This tactic was more humane than the one described in a Miami New Times article. Alligator hunters would sit crying black babies who were too young to walk at the water’s edge. With rope around their necks and waists, the babies would splash and cry until a crocodile snapped on one of them. The hunters would kill the alligator only after the baby was in its jaws, trading one child’s life for one alligator’s skin. They made postcards, pictures and trinkets to commemorate the practice.

The transition to being used for a College Sports team does not appear to have any direct ties to its racist origins, but distancing itself is absolutely for the best.

Origin: “Gypped” (sometimes spelled “jipped”) comes from the word “Gypsy,” which is a derogatory name for the Romani people (also known as the Roma). The Roma originated in northern India and migrated around the world, particularly in Europe, over the course of the last 1,500 years. They’ve faced a lot of persecution and discrimination throughout history, including baseless accusations of theft and child abduction. A stereotype arose that the Roma were thieves, which led to the use of the term “gypped.”

Sold Down The River

Origin: As far as racist words and phrases go, this one is pretty obvious when you think about it. It’s a reference to slaves being literally sold down the river (the Mississippi or the Ohio rivers, specifically) from a slave-trading marketplace to another shore, where they would then be transported to a plantation.

Meaning: a group of people who criticize or heckle someone about insignificant things

Origin: In the 19th-century Vaudeville era, the peanut gallery was the cheapest section of seats (with the worst view). Peanuts were sold at these shows, and sometimes people seated in the cheaper seats would throw peanuts at unpopular performers. Often, the peanut gallery was largely occupied by Black theatergoers. If the term isn’t racist, it’s classist at the very least, suggesting those who sat in the cheapest section were ill-informed and gave unwarranted criticism. And Vaudeville itself certainly had some racist elements — it developed from minstrel shows and often featured caricatures of Black people portrayed by white actors in blackface.

Origin: While technically its origin was pretty neutral — its first known usage was in the collection of Black American folktales (featuring the well-known Br’er Rabbit) Uncle Remus in 1880 — over the years, “uppity” has become a racist term. White Southerners used “uppity” throughout modern history to describe Black people who violated their expectations of deference, or who they viewed as “not knowing their place.” In these situations, “uppity” was usually followed by the n-word. Even recently, conservative critics have referred to President Obama and Michelle Obama as “uppity.”

(This next one surprised me)

Origin: The history of this term is a bit muddled, but it’s thought to have derived from the anti-Semitic chant “Hep hep!”. This was a rallying cry to attack Jewish people in and around the German Confederacy in 1819, during what came to be known as the “Hep-Hep riots.” At some point, “hep hep” became “hip hip,” and “hooray” was added to the end.

Origin: While its earliest origins are unclear, this rhyme was well-known in the days of slavery in the United States. You’re probably familiar with the version that goes, “Eenie meenie miney mo / Catch a tiger by the toe,” but in a previous version of the song, The words were: “Eenie, meenie, minie mo. Catch an nigger by the toe. If he hollers, let him go. Eenie, meenie, minie mo.” An alternate version: “Catch a negro by his toe/ If he hollers make him pay/Twenty dollars every day.”

Meaning: I haven’t seen you in a while

Origin: There are two credible theories about where this phrase originated, and both could very well be true. One is that members of the British and American Navies picked up the phrase in their encounters with Chinese people, speaking pidgin English. The other theory says “long time, no see” came from Native Americans speaking English, as chronicled in some old Western novels. Either way, the phrase can be seen as mimicking non-native English speakers’ attempts to speak English. The same goes for another common racist phrase: “No can do.”

The words: “Ol’ massa’s gone and I’ll let him rest/They say all things are for the best/ But I’ll never forget ’til the day I die…”

The meaning: The song is about a slave and the death of his master. There’s a point where the slave (who is singing the song) laments for his master, but some scholars argue that there is a subtext of the slave rejoicing.

The original lyrics: “It rain’d all night de day I left, De wedder it was dry, The sun so hot I froze to def.”

The meaning: The protagonist of the song is an African-American slave who is portrayed as dumb and naive. In the song, the singer can’t grasp the ideas of temperature and geography.

The meaning: The vocabulary used by lyricist Stephen Foster is meant to mimic black speech. There’s a deliberate choice here to make the singer sound unsophisticated.

You get the picture

America has incorporated racist sayings, imagery and songs permeating throughout its sordid history. Over time, some of the sayings just stuck. Should we write about them? Absolutely. Should they remain in some form of homage to a “simpler time”? Absolutely not. I have seen over the last week many people complaining that we are erasing their childhood by removing monuments/statues to confederate soldiers or taking the likeness of a Mammy off of a box of cereal mix.  In the words of Indiana Jones, they belong in museum. These symbols of a society that has failed their own citizens do not belong ingrained in our daily lives.

The ending of Bamboozled cuts me to the core. The remaining minutes of this movie showcase the not so distant history of media and it’s portrayal of black people. From racially damaging comedic portrayals to kids cartoons, we have been the butt of jokes. Stereotypes only good for a laugh. I recommend that, if you are in the process of learning and you are realizing just how deep the roots of racism and racial injustice really go, I suggest you watch Bamboozled. Once you do, let’s talk about it. We have to do better and the only way for us to do that, is to learn. We can be better than we are now. Bamboozled ends with a quote from the black author, James Baldwin:

People pay for what they do, and still more for what they have allowed themselves to become, and they pay for it, very simply, by the lives they lead.

Articles Used while writing this: